Balance Tone Drone Reeds provide the piper with the ability to achieve the ultimate sound from their drones. Designed by Major Bruce Hitchings, and played and respected by thousands of Highland Pipers worldwide.

Due to many requests, I am now making these B Flat drone reeds. These drone reeds are essentially the same as the standard Balance Tone Drone Reeds but with a different tongue.

These reeds will help you get your pipes in tune easily with other musicians in any musical ensemble.  These innovative drone reeds are: 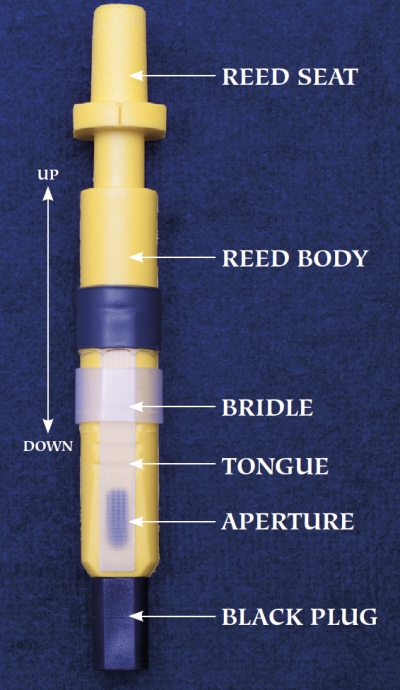 BALANCE TONE REEDS
These unique drone reeds come ready to play. However depending on the drone characteristics and the actual blowing strength of your pipe, small adjustments may be required to obtain the optimum sound from your drones.

REED SEAT
There has never been a standard diameter for bagpipe reed seats; therefore, you may find that you have to apply hemp on the reed seat to ensure you have a firm, secure fit. If not, this will give an unsteady tonal quality and the reed could stop.

Before applying hemp, take the reed seat apart from the reed body by sliding it off. Fit the reed
seat by itself by pulling waxed hemp through the small groove/slit in the shoulder (see Figure 1). The hemp can be pulled through this (like a cotton reel) then wrapped firmly around the reed seat.  Leave a small gap/space at the open end so when you squeeze it into the drone the hemp does not come off the end.

Figure 1 – The reed seat removed from the reed body. Note the strand of hemp which has been pulled through the small groove. The groove holds the hemp in place, which aids when wrapping the hemp around the reed seat.

The reed seat properly fitted should be screwed all the way into the drone until the shoulder is firmly fitted against the bottom of the drone. The reed body can now be refitted by sliding it back on to the fitted reed seat. (Instructions for adjusting the reed body are below.) Care should be taken not to bump/move the reed when fitting into the pipe.

REED ADJUSTMENT
The reeds come with the bridles set to suit a medium strength pipe. Balance Tone Bb HR Reeds can be adjusted to optimise sound quality and to suit your blowing strength. Miniscule adjustments to the position of the bridle have a significant effect on the strength of the reed and tonal quality.

Figure 2 – The reed body with the tongue and bridles removed to show the 2 small raised lines. It is recommended that the bridle stays between these lines.

Adjusting the length of the reed, (either lengthening or shortening) is done by moving the position of the reed body on the reed seat.

Finally the volume can also be adjusted by rotating the black plug to reduce the reed aperture, i.e. the small rectangular hole in the reed body. Reducing the aperture will make the drone quieter. It is recommended however that the aperture be left unrestricted i.e. fully open as this usually produces the optimum tonal quality. Any requirement to produce a quieter sound can be made by adjusting the bridle as described above. Rotating the black plug to close the aperture can also shut off the reed.