I’m trying to collect some images of me through the years of playing and teaching. If you have some images you’d be willing to share please email them to me, including a caption of event and date. 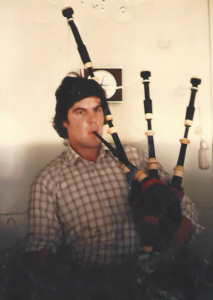 A young Bruce playing his great-grandfather’s MacDougall pipes just after his grandfather had given them to him.

Major Bruce Hitchings MBE BEM was born in Hunterville, New Zealand. He started playing the pipes at the age of 11. By the time he was 16 he was playing with the New Zealand Champions – The City of Wellington Pipe Band.  Bruce visited Scotland in 1975 with the band, and the following year, came back to compete around the Highland Games circuit for what he thought would be a couple of years.

Instead of returning home, Bruce joined The Black Watch Territorial Army as a Piper in 1977. In 1978 he enlisted as a regular into the Queen’s Own Highlanders. The following year he won the Silver Medal for Piobaireachd at the Argyllshire Gathering. The Regiment always endeavoured to have its top players compete at the Argyllshire Gathering in Oban and the Northern Meetings at Inverness where Bruce won numerous prizes including second in the March and Strathspey/Reel in 1980. 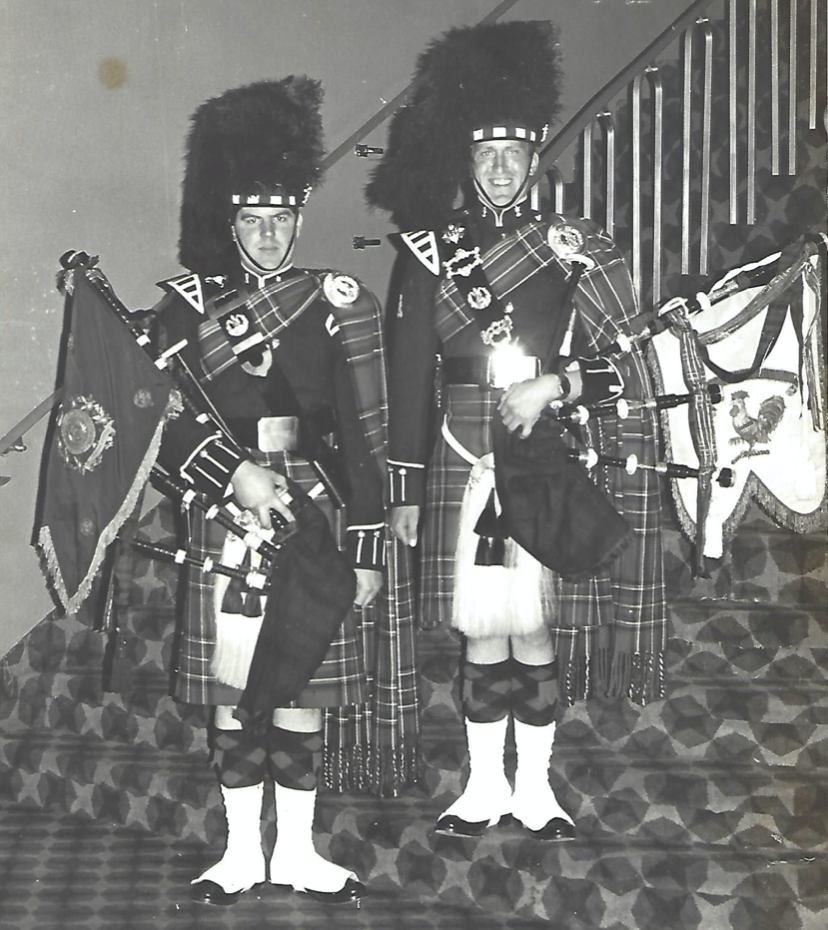 Bruce in the uniform of The Black Watch.

In 1986 he became the Battalion Pipe Major, a position he held for six years and during this time was awarded the British Empire Medal (BEM). The last eight years of his military career was spent in the post of WO1 Pipe Major, the Senior Pipe Major, British Army and Chief Instructor at The Army School of Piping, The Castle, Edinburgh. His main responsibility during this period was the teaching of the future Pipe Majors for the British Army and he was rewarded with the Member of British Empire Medal (MBE) for services to Army piping in 2000.

On completion of his regular service, Bruce was commissioned into the Territorial Army with responsibility for the development of piping within the Reserve and Cadet Forces. After a total of 33 years’ service, he finally resigned his commission (Major) in 2011 and continues to be held in highest esteem in military and piping circles.

Bruce set up the highly successful Highland Reeds company in 2000 and has developed new piping products with an aim to simplify the science of piping.  His Balance Tone Drone Reeds and range of moisture systems are popular with pipers the world over for both their simplicity and effectiveness. He continues to work on innovative products to make the life of the piper easier.

Throughout his career Bruce played at many prestigious events for both the British Royalty and foreign dignitaries. He remains in demand as a piper through teaching and running schools and workshops in the U.S., Germany, Austria and France on a regular basis. Bruce also judges internationally and at many of the Scottish Senior competitions, including the Silver Medal at the Northern Meetings 2013. He gives recitals in places as far afield as China, New Zealand and the USA.

In 2012 Bruce was appointed a Board Member of the College of Piping and a member of the Piping Committee for the Northern Meeting Piping Competition. He continues to be a Senior Examiner for the Scottish Qualification Authority (SQA) Pipe & Drums Qualifications Board (PDQB).

Bruce played at many Tattoos during his military career including being the Lone Piper on many occasions one of which was the 2000 Edinburgh Military Tattoo in New Zealand. During the eight years as Senior Pipe Major he was part of the Production Team for the Edinburgh Military Tattoo.  His responsibilities encompassed leading all military and civilian bands in their performances.

Applying his military career status and using his myriad of military contacts in both British and American services, Bruce is an invaluable asset in any Tattoo production. Since 2014, he was the Producer of the annual Highland Military Tattoo that was held near Inverness, Scotland and puts in uncountable hours of organization as a demonstrated born leader.  In 2011 he produced the first International Military Tattoo in Las Vegas, Nevada and the New York Tattoo in 2013.